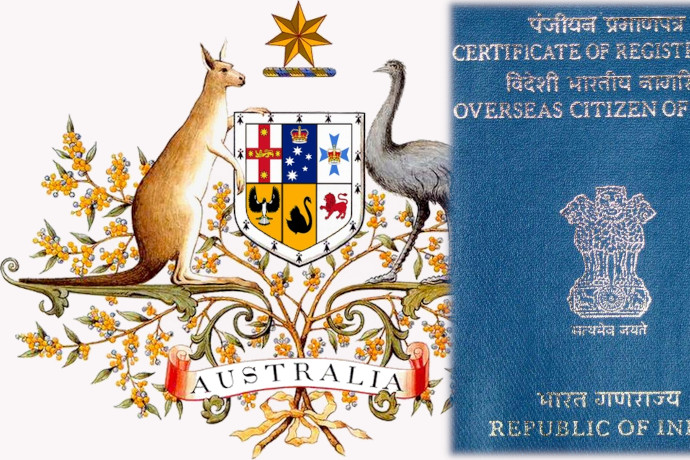 An Australian Indian Vaishali Ghosh, Liberal Party candidate for the seat of Wills, (in the Northern suburbs of Melbourne) has been in the news for voluntarily withdrawing as Liberal party candidate because of OCI (Overseas Indian Citizenship) concerns; she may be in breach of Section 44 of the Australian constitution which defines disqualification of members of parliament.

Both major parties have taken the position that Australians of Indian descent, also holding the Overseas Citizen of India (OCI) cards, will be disallowed to stand as candidates in this federal election.

Both parties have had enough of Section 44 problems in the last parliament and perhaps have no more appetite for it.

A narrower interpretation of Section 44 of the Australian constitution throw doubt on the eligibility of those Australian Indians who hold both Australian citizenship and Overseas Indian Citizenship (OCI), although OCI is nowhere near being a citizen of India in the “dual “citizenship context.  From the very wide Section 44, the relevant law in Vaishali Ghosh’s case is contained in Section 44(i)

shall be incapable of being chosen or of sitting as a senator or a member of the House of Representatives.

However, OCI does not confer rights of a citizen of India on the holder. The legislation clearly states its limitations.

Conferment of rights on overseas citizens of India (OCI holder)

o              under article 16 of the Constitution with regard to equality of opportunity in matters of public employment.

Narrow approach of the parties
The law is clear but treading safely this time, the parties have taken a narrower approach.

But Wills is not an electorate Liberal strategists will be thinking of winning. They have never held that seat and in the last few elections the seat seems to be changing, from being an ultra safe Labor seat to being a strong heartland for the Australian Greens.

Although the Liberal party’s chances of picking up the seat of Wills look difficult, the party is in the process of nominating a replacement candidate.

Another seat where Indian community is in limelight is the seat of Scullin. The seat is currently held by Andrew Giles of the Australian Labor party. The seat was formerly held by the famous speaker of the House of Reps Harry Jenkins who held the seat in 2010 by a big margin getting 57,355 (72.25%) of votes. An Indian Australian of Punjabi descent Jag Chugha as the Liberal candidate in 2013 raised the Liberal vote from 29.47% to 35.65%. The vote went down in 2016 with a new Liberal candidate in Melanie Stockman who managed only 32.72% (down from 35.65%). The seat has been an ultra safe Labor seat and has been held regularly by the ALP since at least 1955, when the electorate was FIRST named as Scullin.

The electorate of Scullin is located in the outer northern suburbs of Melbourne, including Diamond Creek, Epping, Lalor, Mill Park, South Morang, Thomastown and Wattle Glen, as well as the townships of Hurstbridge, Plenty and Yarrambat. According to the last Census, the most common ancestries in Scullin  were Australian 15.4%, English 14.7%, Italian 10.7%, Macedonian 5.2% and Indian 5.0%.

With 57.7% of people were born in Australia, India topped the list after Australia with the most common countries of birth for the people of Scullin with 5.4%, Italy following close at 3.4%.Numbers of people born elsewhere overseas were much lower.

Perhaps that explains why the Liberal vote was up in 2013 with an Indian Australian candidate Jag Chugha who had a swing to himself of more than +6.7%.

Liberals have fielded another Indian Australian Gurpal Singh this time against the sitting member Andrew Giles. Looking at the margins, Giles seems to be quite safe.

Bail: Why Disha Ravi and not Safoora Zargar?