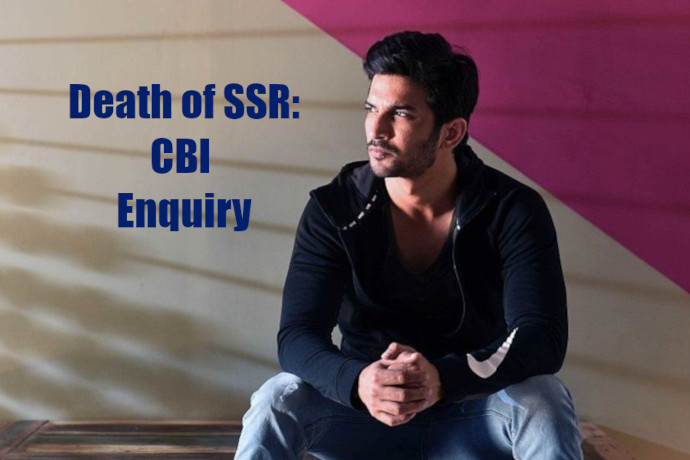 Millions of fans of Sushant Singh Rajput or SSR felt very relieved last week when on Wednesday, 5 August they heard Solicitor General of India Tushar Mehta telling the Supreme Court of India of the Centre government’s decision to order CBI inquiry into Sushant’s death. It was the day Rhea Chakraborty’s application for transfer of case from Bihar to Mumbai came up for hearing in the Supreme Court of India. But, the question is, has CBI really taken over?

BT has already reported that Justice Hrishikesh Roy refused to grant any interim relief to Rhea. All that happened in the Supreme Court was:

Post the hearing on August 5, all formalities for the CBI’s investigation to proceed – the required notification, registering of the FIR by the CBI and the composition of the CBI’s Special Investigative Team or SIT  have been announced. The CBI FIR, like the Bihar FIR names Rhea, her father, mother, brother, housekeeping manager Samuel Miranda and Rhea’s business manager Shruti Modi.

The ED or Enforcement Directorate officials have been in the news summoning and grilling the chartered accounts of both Sushant and Rhea and then Rhea herself.

All media outlets have reported on the news of CBI investigation into Sushant’s death. That seems being corroborated by the fact that the ED officials are seen in action. But that may be misleading.

Has CBI already been really appointed to investigate Sushant’s death?
The short answer is “No” or yes, subject to the Supreme Court’s final orders in application before it filed by Rhea Chakraborty. The ED in action does not in itself prove anything in relation to the CBI. The two agencies – although Central government agencies, are instruments of two separate departments and operate under separate laws.

The Supreme Court Order (click here to read) of 5 August is silent on it.

The legal position is – unclear and hence, in my view the Supreme Court will have to decide who conducts the investigation. It cannot remain silent. The reason is the legal mechanism which comes into play for CBI to investigate a crime. This is how it works:

The CBI can take over investigation of a crime on its own or suo-moto only if the crime has been committed in a Union Territory. If a crime has been committed in a state, it is a requirement of the ACT (Section 6 of the DSPE Act 1946 under which CBI operates) prior consent of that State is required. In other words, the Central Government can authorize CBI to investigate such a crime in a State but only with the consent of the concerned State Government.

However, the Constitution of India provides under Article 32 the Supreme Court of India and under Article 226 High Courts can order CBI to investigate a crime anywhere in the country. The exercise of that power does not require prior consent of the State.

Now, in the absence of the consent coming forth from the Maharashtra government, the FIR registered in Bihar and the Bihar government’s request (read consent) for the CBI investigation becomes important. But then it brings in the issue of jurisdiction of the Bihar police. It becomes absolutely significant to decide what crime of part thereof has been committed on which the FIR lodged in Bihar could be based.

That makes the application filed by Rhea in the Supreme Court of India under Section 406 of the Criminal Procedure Act 1973 very meaningful. Under this section, the Supreme Court has been given special powers to transfer cases between states.

The Supreme Court of India does not require the state’s consent in either case, where as the Centre government needs state’s consent for the CBI to take over as stated above.

Given that the Bihar and Mumbai police and state governments being at loggerheads with each other, the news of CBI take over should be treated no more than undecided perhaps premature – mired in legal minefield. Interestingly, the legal technicality is – the application Rhea filed in the Supreme Court was against – the investigation by Bihar police – and if Bihar police is no longer investigating then that application becomes – to a layman meaningless. But it is not that simple.

The Supreme Court is faced with many legal challenges in this case including a first of its kind – the issue of federalism – the centre state relations – Bihar & Cenre government and Maharashtra & Centre government as the Indian Penal Code 1860 (Criminal Code in India) and the Criminal Procedure Act 1973 (Criminal Procedure Code of India) both fall in the Concurrent list in the Constitution of India. Both Centre and State can make laws and in case of a conflict between two legislations, the Centre government’s legislation to the extent of conflict, prevails. But the Code itself the DSPE Act 1946 itself requires the Centre to order the CBI inquiry a crime, to get the state to consent – which in this case – it has from one (Bihar) with the jurisdictional question mark but does not have from Maharashtra where the actual crime has been committed.

The Supreme Court of India was faced with a similar situation in the case State of West Bengal V THE COMMITTEE FOR PROTECTION OF DEMOCRATIC RIGHTS, WEST BENGAL & ORS. (CIVIL APPEAL NOS.6249-6250 0F 2001.) In that case the State government of West Bengal had challenged the CBI inquiry (ordered by the High Court of the state) without its consent. The doctrine of distribution of legislative powers as between the Union and the State Legislatures was cited, particularly with reference to the three Lists in the Seventh Schedule of the Constitution and the distribution of powers between the said three organs of the State.

In that case, an investigation was sought into the conduct of the police, for not investigating cognizable criminal offences and not making any arrest of the persons named in the FIR. And the High Court had deemed it appropriate to direct the CBI to investigate when the state had refused the CBI inquiry.

The state had in particular, cited Section 6 of the DSPE Act 1946 which requires prior consent of the state.

Delivering the judgement on 17 February 2010, the five judge bench had found that the High Court directing the CBI to investigate did not require state’s prior consent. It also clarified that Centre’s requirement of the state’s consent under Section 6 of the DSPE Act 1946 does not take away the powers of the Supreme Court and the High Courts established under the Constitution of India. The Court said:

“Being the protectors of civil liberties of the citizens,  this Court  and  the High Courts  have not only the power  and  jurisdiction but also an obligation to protect the fundamental rights, guaranteed by Part  III in general  and under Article 21 of the Constitution in particular, zealously and vigilantly.”

No doubt, for CBI inquiry into Sushant’s death, the issues in the present case are before a single judge and even more complicated.

UPDATE: Hearing on 11 August
Justice Hrishikesh Roy has reserved his decision on the matter. All parties to file 2 page submissions by Thursday, 13 August. The matter will come back before His Honour for decsision and reasons for His Honour’s decision, judgement as the business of the Supreme Court of India permits.